What can I do during Phase 3 of the de-escalation? 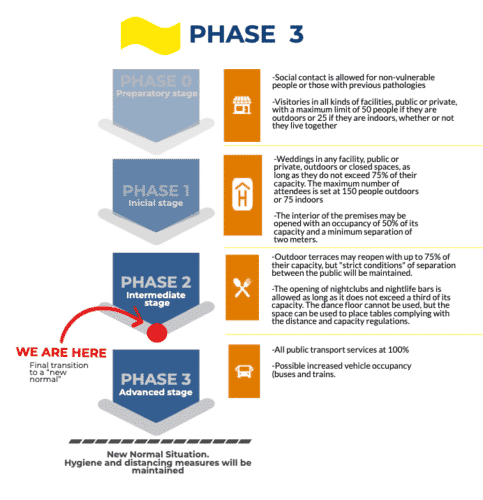 After recording its first cases of Covid-19, Spain introduced one if Europe’s strictest lockdowns. ‘State of alarm’ has restricted Spanish citizens from moving freely throughout the country – something that will also end on June 21.

The Ministry of Health has accepted the request to advance in the de-escalation of  Castilla-La Mancha, Castilla y León, Girona and Central Catalonia, the Valencian Community and Ceuta.

What can be done in Phase 3 of the de-escalation?

Some of the most awaited are the elimination of time slots, meetings of up to 20 people in homes and outdoors, the reopening of discotheques and of the common areas of hotels and shopping centers and the increase in capacity up to 50% in cinemas, theaters and auditoriums.

However, during Phase 3 it will be the autonomous communities that make the decisions on how to adapt these aspects to their territories and when to end the de-escalation. Mobility between provinces of the same community will also be allowed, with the exception of the territories of Castilla y León and travel between Toledo, Ciudad Real and Albacete in Castilla-La Mancha.

For movements to other autonomous communities, there will be no restrictions as of June 22, when the state of alarm ends.

Some autonomies, have already announced that they will bring forward the opening between the two communities to June 19.

[Consult the BOE with the regulations of Phase 3]

What to expect for Commerce on Phase 3

Retail commercial establishments and professional service activities can open regardless of their useful surface for exploitation and sale, although with the capacity reduced to 50%.

The common areas of the shopping malls and their recreational areas reopen with a limited capacity of 40% and a minimum distance of two meters. In the markets the number of stalls is increased to half of the usual ones.

What to expect for Social and personal sphere on Phase 3

There will be no time slots reserved for any group. In the case of those who are within the risk groups, extreme safety and hygiene measures must be taken.

Mobility between the provinces of the same autonomous community that have reached this phase is allowed, although to travel to another region it will be necessary to wait until the “new normality” is reached.

In addition, the number of people who can meet at home and outdoors is increased to 20, always respecting safety and hygiene regulations, especially the safety distance of at least two meters or, failing that, protection alternatives physical.

The wakeings and burials can be held with a maximum of 50 people outdoors and 25 indoors, and attendance at places of worship is allowed until they exceed 75% of their capacity.

Weddings can be held in all kinds of facilities, public and private, either in open or closed spaces, provided they do not exceed 75% of their capacity and, in any case, with a maximum of 150 people outdoors and 75 in closed premises.

Congresses, meetings, business meetings, conferences and events promoted by entities of a public or private nature are allowed, without exceeding in any case the figure of 80 attendees.

We are English speaking Spanish lawyers in Spain. If you would like more information or have any questions  please do not hesitate to contact us directly.

We want to be your English– French– and German– speaking lawyers for all your legal needs. Contact us, we would be happy to assist you in any way we can.

You have got questions, we have got answers.

WHAT OUR CLIENTS SAY ABOUT US